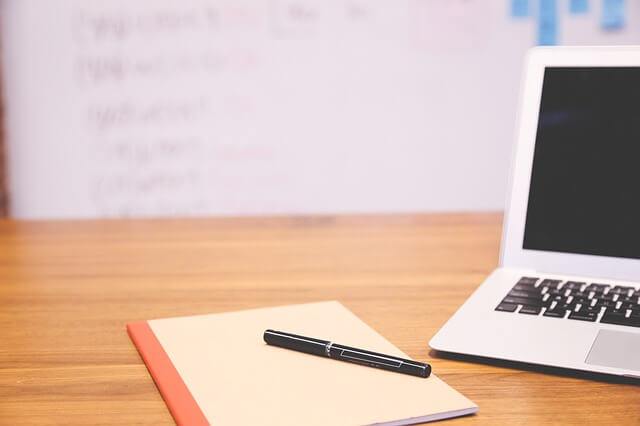 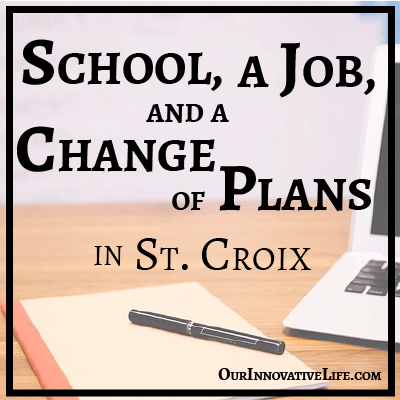 School, a Job, and a Change in Plans

Remember this post about starting home school? Yeah, me too. I published the original post on August 16th and by August 18th there was a change in plans. Life has a funny way of working out sometimes. I also know that God knows us and what we need – even better than we do most of the time.

We had planned on homeschooling our children. I had curriculum planned. I had supplies. I was ready. Stewart had spent months searching for employment on St. Croix. As soon as we decided to move to St. Croix, we knew we would need some way to provide for our family. Stewart immediately started sending his resume and contact information to any and all prospects. He was not narrowed in his search. He literally applied anywhere that was hiring. He interviewed a couple of places and was turned down. After submitting his resume to over 100 businesses he was feeling quite discouraged.

On Monday, August 14st, he was doing his regular job search and he came upon an executive assistant position at the foremost private school on the island. My heart started racing. I got all excited and we worked to put together his resume and all other requested items to apply for the job. He got a call that afternoon to come on Wednesday for an interview. We began the most earnest prayers we have ever offered. He went to the interview on Wednesday. I was home with the boys – my stomach churning with nervous butterflies and a continuous prayer running through my mind and heart. He came home and said that interview had gone really well. He would have a second interview on Thursday and they would let him know by Friday afternoon.

Over the next couple of days we tried to move through our days with ease and normalcy – trying not to be too anxious. We worked around the house. We proceeded with our school work. We played. We waited and waited and prayed – a lot.

Friday came. We waited. We worried. We had done so well in remaining positive and thinking positive affirming thoughts. We felt like it was right. We started to run the scenario of him not getting the job. Where would we look next? Would something show up soon? We needed to provide for our family. We watched the clock. We started to decide it must not have been right and started to ask “How can it get better than this?” or “What else is possible?” Stewart went out to work in the yard to try and get his mind off the whole thing.

Then the phone rang at 2:15pm. It was the head of the school saying that he’d gotten the job and they’d like him to come in at 3:00pm. Stewart thanked him and then rushed off to the shower to get ready to head off to work! That sounded and felt so good to say!

Now that he had a job at the school, we were faced with the decision of what would be best for our children as far as their schooling was concerned. As part of the employment, the school offered a tuition remission for employee’s children to attend school. Did we want them to attend the school or continue with homeschool? We decided the best course for our family was to have our boys attend the school. They would have an opportunity to meet and make new friends which was a concern of ours living on a small island. They would also be able to go to the same school where their dad worked – bonus!

School was starting the next week and they had a list of items that were necessary for each grade. I madly started looking online to try and get the supplies from Walmart….only to find that they would not arrive until the 2nd week of September – way after school had started on the 28th. Ugh! My only other option was to go to the local Kmart and purchase the needed school supplies. The cost was about double than what I am accustomed to. As I was checking out, the checker said “I don’t ever buy my school supplies here.” I asked her where she bought hers and she replied “In the states.” Well….if only we all had that luxury of time. Unfortunately, I had a couple of days and couldn’t wait for someone to ship the items to me. So what I lacked in time I made up with dollars. “I will be better prepared next year” was all I could think.

We also rushed to fill out paperwork -paperwork for the boys’ registration and paperwork for Stewart as a new employee. What we learned….or rather re-learned is…adulting is hard – and we don’t really care for paperwork.

Back to School – Take Two

Stewart spent the week of the 21st – 25th learning his new job and getting ready for school to start on the 28th. On the 28th, the boys went and met their teachers and checked in. It is like “Back to School” night in Utah but during the day. They had their first full day of school on the 29th. They LOVED it!

The boys attended 5 full days of school before Hurricane Irma hit. It was little more than a tropical storm for us but it devastated our sister island, St. Thomas. We spent the next couple of days cleaning up the school to be ready to open back up. They had a full week of school from September 11th – 15th. On September 18th we knew that Maria was headed for us.

Maria hit the island on September 19th. The school was closed for only 9 days after Maria hit our island home. During those 9 days staff, faculty, and members of the community worked really hard to clear debris and get the school ready to open as soon as possible. We joined the efforts and hauled trees and branches. Stewart cut large branches off of fallen trees. We swept and raked. It felt good to be a part of a community working towards the common goal of getting the school back up and running.

Due to the curfew, the first day back was a modified schedule where the children attended 12:00 – 4:00pm. It was interesting to be on that kind of schedule; spending the morning doing homework and coming home when it was starting to get dark. Also, because there were teachers who had gone off island for the hurricane, there were some who were not back when the school opened because the airport was not open and functioning. I stepped in as a substitute and taught in the upper school (high school) from September 29th until the airport reopened on October 11th and the teachers could return on October 13th.

What I observed in that time was that the students were very resilient and willing to share their experiences. They were ready for school to get back in session so they could process what they had gone through with their peers. They needed the routine of school. They wanted to get back to normal and get on with their studies.

The school sustained some flooding damage and lost some of the student population to the mainland. In order to offset those costs they are fundraising…and we know all about that. If you are in a position to help, here is a link to be able to donate to this FANTASTIC school!

We are back to regular schedules now. The curfew was lifted a couple of weeks ago. The school runs on generator power still. The power has not been restored there either. The faculty and staff have worked really hard to ensure a sense of normalcy for the students – even in the face of their own struggles like cars that had their windows blown out by the storm or lost roofs or no power.

I take the boys (all of them) to school and then I run errands or clean our house or take care of post-hurricane adulting like insurance claims, paying bills, or disputing charges for internet service that we haven’t had since September 19th.

We thank God each day that Stewart has a job. He works with amazing people. My children have AMAZING teachers. We know that a loving Heavenly Father lead us to this island, to this home, and to this job. This week, as we are a little more focused on gratitude, we cannot help but bear witness of the tender mercies that we have received every step of this journey. “How can it get better than this?” Miracles really do happen and we are grateful for them all.

What are you grateful for today? Tell us in a comment below!