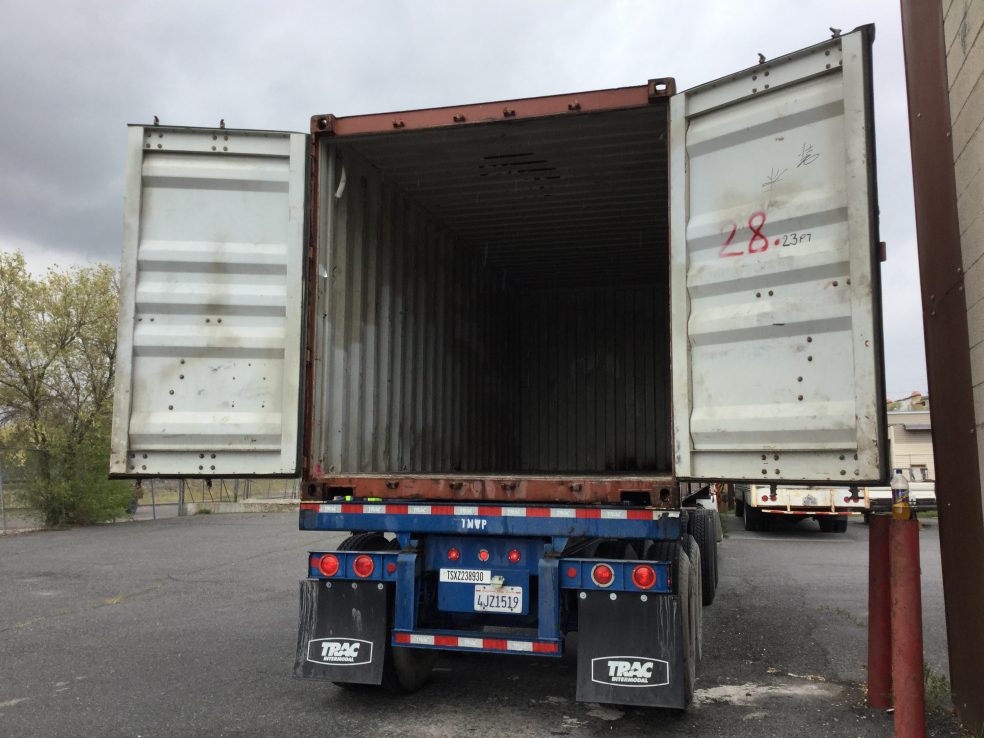 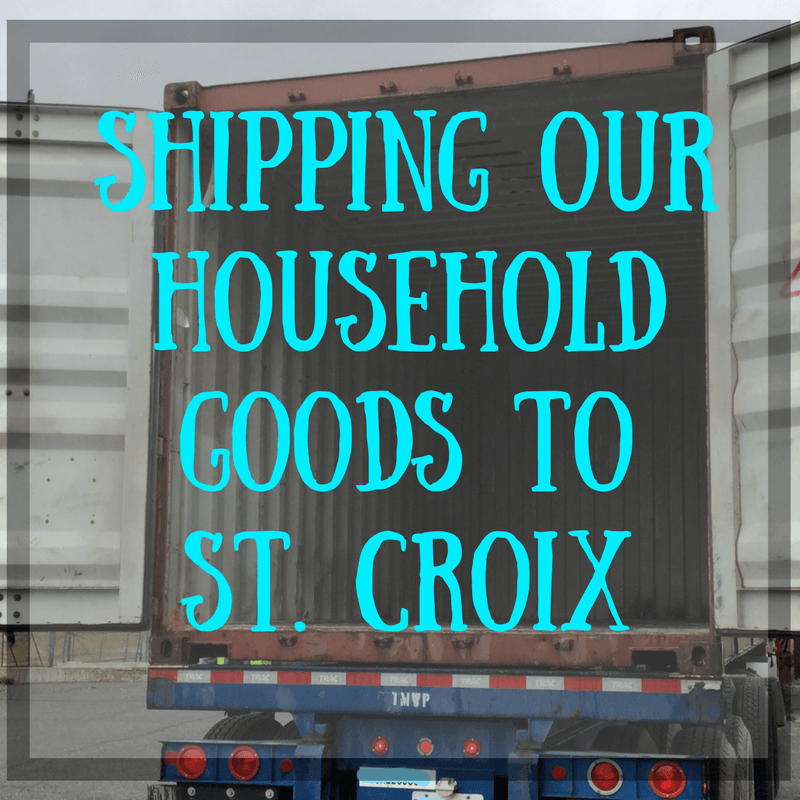 After we decided to sell our house, and move all of our stuff…the next step was to figure out how to get all of our stuff to St. Croix. It took a little bit of research and a whole lot of time to figure things out.

We had initially thought about a self-storage unit for the time we had until we would be ready to send everything to St. Croix. In fact, we had secured a storage unit and taken a couple of loads to one, when we found the moving company that would be able to store all of our household goods for the time from when we sold our house (January) until we were ready to ship everything (April). That meant that our possessions sat in a warehouse for those months. It also meant that it feels like we have moved several times. It sounds like this: out of our old house to the self-storage, from the self-storage back to the old house, having the moving company come and move everything out of the old house to the warehouse, moving stuff from the old house to my in-laws, from my in-laws to the warehouse to be placed on the container going to St. Croix, and one final packing that we will mail to St. Croix before we get on the plane. Phew!!!

How can it get better?

The night before I was going to meet the container to ensure that all our household goods (that’s what they call all your worldly possessions in the shipping world) were on and secure, I packed up the last bit of things we had taken to my in-law’s home to live with for the past couple of months and stacked it all in my mother-in-law’s living room. I was meeting the movers and the container at 9:00am and still had to get my kids off to school in the morning. I have learned that I MUST grossly over-estimate the time it takes me to accomplish things…so…I plan ahead. I had everything ready to go and packing my in-law’s truck the following morning went smoothly with the help of my mother-in-law and my sister-in-law. It was all set to go and I got my kids off to school without a hitch.

I hopped in the truck at 8:15am and headed up to Murray where I would be meeting the container. I made it over the “point of the mountain” when I heard a loud pop – like a giant rock had just hit the underside of the truck. Rewind to the day before when my sister-in-law had filled the tire on the truck because it was a little low. The tire had blown and I had a truck full of boxes and bins that were supposed to get on a container headed to St. Croix. I prayed. I slowed down. I was really close to the Bluffdale exit. I watched as the front right part of the truck started to sag and the truck became more and more sluggish. I have never experienced blowing a tire. There’s a first time for everything, right? I was just not really interested in having that experience right then. Oh well…I decided to choose joy…or at least calm. The container was going to take some time to load and I figured I could get there in time. I happened to have a cell phone (I know – for those of you who know us, we have not had cell phones. We don’t like the idea of being always available. It is possible to survive without one – more on that maybe later) and was glad I did. I called my mother-in-law to let her know what was happening. She got on the phone with my sister-in-law (*side note* I really hit the jackpot marrying into my husband’s family – they are GOOD people) who immediately called me and said she was on her way in one of her larger (van and/or suburban) and would come rescue me – whether moving everything from the truck (including 3 bikes) to her vehicle or changing the blown tire. I was surprisingly calm about all of this.

As I was talking on the phone with her, a Freeway Angel (aka Incident Management) Truck pulled up behind me. A very nice man, named Kyle, proceeded to change the tire on the truck. While he was working, I called my sister-in-law and told her to be on stand-by should Kyle not be able to manage. I also called the moving company to let them know that I would be a little bit late. I was back on my way to meet the container by 9:00am and was at the warehouse by 9:15am. It was a little bit of a miracle. I continue to see tender mercies from God as we go through this process. 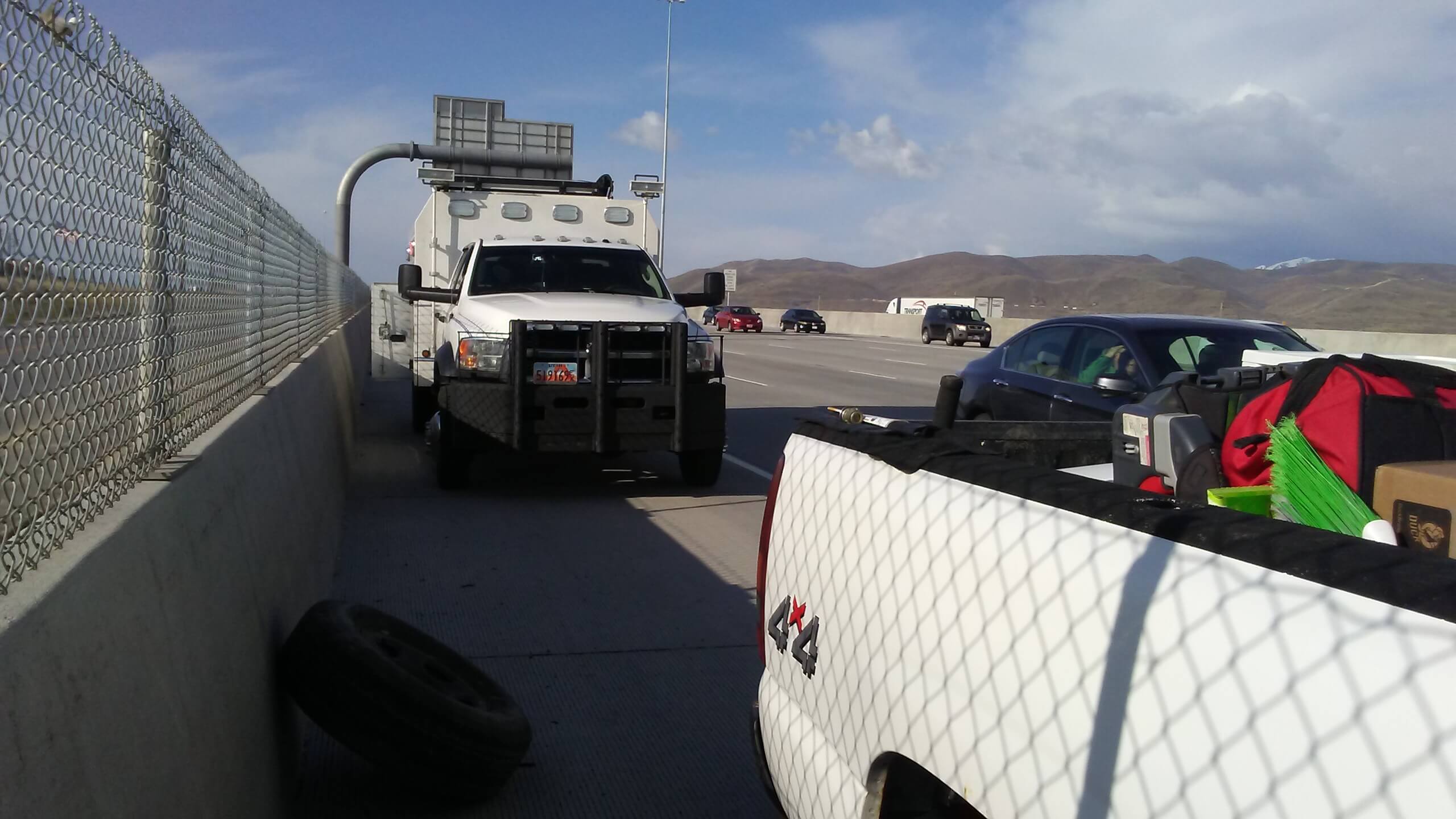 Once I made it to the warehouse, I met the moving crew. A couple of the guys were the ones who moved my stuff out of our old house. I was in contact with the broker company who was arranging the shipment from Utah to St. Croix to ensure that the container was on its way. I learned that they were going to be late due to a problem with a booking number that the vessel (the boat!) that the container was on had been given to the trucking company incorrectly. Fast forward 3 HOURS later and we were finally loading the shipping container. The moving company guys were VERY patient and the broker was very apologetic. I think I earned a couple more gray hairs that day but everything got on the container and is on its way to St. Croix. The route is Utah to Houston, TX – Houston to Jamaica – Jamaica to St. Martin – St. Martin to St. Croix! Check out this map!

I sometimes feel like I am brave. Often I question my sanity. Most of the time, I just take one day at a time and keep moving forward. In order to create change you have to be willing to take some risks and be brave. Sending off all our personal belongings in a 20’ container and trusting it will make it 3,185 miles away to a house you have never seen is pretty crazy….and brave. I am choosing joy. I am choosing change. I am trusting in God and allowing Him to direct our lives. What else is possible? What else can we achieve? How can it get better than this? Not much time left…next stop….ST. CROIX!!!

How have you been brave recently?
Drop a comment below!

Hello and WELCOME! We are Stewart & Sarah and we hope to inspire you to be innovative with your own life. We got tired of the life that we were leading so we sold our house, Stewart quit his job, and we have moved our family of four 3,158 miles from Utah to St. Croix, USVI.